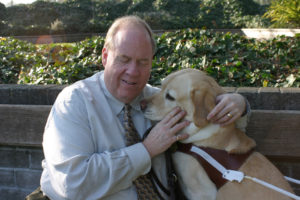 In a nutshell
Michael Hingson, blind since birth, survived the 9/11 attacks with the help of his guide dog Roselle. Since that day, not only has Michael been in constant demand by meeting planners, companies, associations, and organizations of all sizes to speak at their events, but he is also called on regularly to use his expertise as a blind person to consult with different groups and the media on subjects related to Technology, Diversity and Inclusion.

Michael is an internationally acclaimed public speaker and consultant who uses his personal stories and experiences escaping from and surviving the terrorist attacks upon the World Trade Center on September 11, 2001, as the backdrop for his talks on the life lessons he’s learned growing up in a world different from what most of us experience. A frequent guest on CNN, ABC, NBC, CBS and Fox News, and featured in The New York Times and many other publications, Michael’s riveting presentations go way beyond his own 9-11 story, inspiring and motivating audiences with topics such as Trust & Teamwork, the Human-Animal Bond, Moving from Diversity to Inclusion, Strategies for the Future, and Adapting to Change in Challenging Times. Michael has appeared on Larry King Live five times, and other major national broadcasts such as the Today Show, Fox and Friends, The 700 Club, Joy Behar, Animal Planet, the Hour of Power, and the Hallmark and Discovery channels.

In hundreds of TV and radio appearances, feature articles, and speaking engagements, internationally acclaimed inspirational speaker and author Michael Hingson has done much more than simply tell his own 9-11 story. He has also explored the broader lessons and implications of the tragedy in such heartfelt, thought-provoking presentations as:

Out of the Ashes: Learning to Survive in a Changing World

Using the compelling account of his harrowing journey to safety on 9-11, Michael challenges his audience to access their own skills: trust, teamwork, risk-taking and creativity, to ease their way through changes in their work and personal lives.
Labrador Lessons

Meet “Roselle,” canine hero of 9-11. Her human partner describes what can be learned from this brown-eyed beauty: balancing work and play, the importance of love and trust, how one plus one can equal so much more than two, knowing what’s around the corner, how to look out for the other guy, how to get what you want out of life, and how to be a hero EVERY DAY.

Thinking Inside the Box – the Toolbox, That Is

What tools do we already possess, that when used creatively or in tandem with others’ strengths, can make us more effective? Drawing on a lifetime of experience developing the skills needed to navigate through a sighted world, Michael shows us that each one of us can turn our strengths and weaknesses into opportunities for creative adaptation and teambuilding partnerships.

Turning the Tables on Terrorism

As a survivor of the 9-11 tragedy as well as a person who lives without sight, Michael Hingson offers a unique perspective on life and relationships. He asks us to explore how we may sabotage our own efforts, and how fear, courage, denial, trust, beliefs and philosophies have a tremendous impact on our personal lives, on our organizations and our world.

Michael Hingson draws on his personal experiences (25 years in sales, 38 years as a Guide Dog user, and his experiences in the crisis of 9-11) to address the issue of teambuilding: how to build a successful team; how to make people value each other and work together; how the resources we use to pull together in times of crisis are available to us in our daily lives.

The Power of the Human/Animal Bond

Millions of Americans enjoy the love and companionship of their pets. Michael Hingson describes the importance of the human/animal bond, its impact on society, and the medical research that supports its benefits. He also talks about how to socialize and be responsible for your dog.

Each of us makes hundreds of choices every day of our lives. How we choose to react to situations can have profound effects on our lives, on society and on the world.

Michael Hingson’s life changed dramatically after the tragedy of 9-11. He challenges us to re-examine our priorities and bring truth, transparency and compassion back into the world of business and our personal relationships.

Michael Hingson, totally blind since birth, grew up believing that the real “handicap” of blindness was not the lack of eyesight, but rather the lack of vision others had about blindness and the capabilities of blind people. “Right from the beginning of my life my parents taught me that I could choose to live my life and be as successful as I wanted or I could be a victim and be an unhappy person,” Michael recalls. He attended public school through high school and then attended the University of California at Irvine where he graduated with honors and received a Master’s degree in physics. Along the way, he attained the rank of Eagle Scout and was inducted into the Order of the Arrow, where he rose to the rank of Vigil, the highest honor a Boy Scout can receive. In addition to his studies in physics, Mike also earned a secondary teaching credential from UCI’s School of Teaching and Education.

After college, Mike entered the workforce helping Dr. Raymond Kurzweil, one of the world’s foremost inventors and futurists, to develop the first Kurzweil Reading Machine for the Blind. While working for Kurzweil, Michael was asked to manage sales of the products they invented. That launched Michael’s extremely successful career in sales and sales management, selling products not only to blind people, but to Fortune 500 companies in the United States and Canada.

In the mid-1980s Michael Hingson left his sales management position at Kurzweil Computer Products, Inc. after Xerox purchased the company and started his own company, The System Connection, to sell PC-based computer-aided design (CAD) products to architects. In July 1989, Mike sold his company and took a job selling high-tech innovative computer products in the Eastern region of the United States.

In 2000, Michael Hingson was employed by Quantum Corporation to open and manage a sales office in New York City. He opened the office on August 1, 2000 on the 78th floor of Tower One of the World Trade Center. Mike was in his office on September 11, 2001 when terrorists attacked the Center and the world changed forever.

All proceeds from Michael’s presentations go to Guide Dogs for the Blind.

Thunder Dog: A Blind Man, His Guide Dog, and the Triumph of Trust at Ground Zero 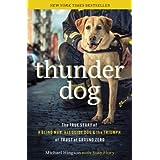 In Thunder Dog, follow Michael and his guide dog, Roselle, as their lives are changed forever by two explosions and 1,463 stairs. When the first plane struck Tower One, an enormous boom, frightening sounds, and muffled voices swept through Michael’s office while shards of glass and burning scraps of paper fell outside the windows.

But in this harrowing story of trust and courage, discover how blindness and a bond between dog and man saved lives and brought hope during one of America’s darkest days. Learn more and purchase the book 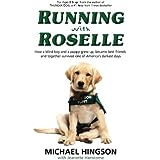 A puppy who became a true American hero. The blind boy who let nothing stop him. When they finally grew up and met, it was magic. On September 11, 2001, a blind man escaped the World Trade Center by walking down 78 flights of stairs with his guide dog. Days later, America fell in love with Mike and Roselle, and the special bond that helped them survive. Mike shared his story in the New York Times bestselling book, Thunder Dog.

Now, in Running With Roselle, kids can follow Roselle as she grows from an energetic yellow Lab prone to stealing her puppy raiser’s slippers to a confident guide dog who passes the ultimate test when her partner needs her most. Meet Mike, a boy blind from birth who excels in public school, shocks the neighbors by riding his bicycle through the streets of Palmdale, CA, drives a car around his college campus, and uses his relationship of trust and teamwork with Roselle to help others on a day that changed America forever.