InfoBest-fit Audiences:PresentationsBioTestimonialsBooks
Nationally syndicated tech expert with millions of followers brings professionals up to date on latest digital trends and takes anxiety out of tech for everyone else.

In a nutshell
Want to keep up with everything tech, including the latest digital trends? Leo Laporte, known as “The Tech Guy,” hosts a national radio show on technology syndicated by the Premiere Radio Networks that airs on 200+ stations nationwide and boasts an average quarter hour audience of 500,000. Known as the go-to expert on everything digital, his passion for technology is contagious and his energetic, fun presentations ease the anxieties of technophobes while bringing geeks up to date on the latest trends. Whether your audience is seasoned techies or everyday people who want to get the most from the digital world, Leo’s interactive presentations will entertain and enlighten, as he runs down the latest advances in the tech world.

A pioneer in tech broadcasting and Emmy winner for his work on TV and a TEDx speaker (Dubai, 2009), Leo makes regular appearances on mainstream radio and television shows as a commentator and has appeared more than a dozen times on Live with Regis and Kelly. Other appearances include CNN, The Today Show, and NPR’s All Things Considered.

Leo was host of Internet!, a weekly half-hour show airing on PBS in 215 cities nationwide. He reported on new media for Today’s First Edition on PBS, and was a Managing Editor at Ziff-Davis Television, where he wrote and co-hosted The Personal Computing Show, a half-hour weekly television show that aired on CNBC. He created and was a daily contributor to The Site, an hour-long technology news magazine that aired nightly on MSNBC, CNBC International, and NBC Superchannel in Europe and Asia. Leo won an Emmy in 1997 for his work on The Site.

Fast Facts
Leo produces and hosts the most listened to tech podcasts in the world with more than six million unique downloads each month at TWiT.tv.

His IPTV network, TWiT Live, is watched by several million viewers every month.

Leo has one of the largest social networks of any tech journalist in the world with more than 500,000 followers on Twitter, 275,000 subscribers on Facebook, and 250,000 followers on Google+. His blog has 100,000 unique readers every month.

His popular video/audio podcast network, TWiT.tv, has over 5M downloads per month from its global audience.

Offered as keynotes, breakouts, seminars or workshops, retreats, trainings and Webinars, and customized for your group. Leo Laporte is also available as a panel guest or moderator.

When your organization needs the latest breaking news in the areas of Innovation, Technology, Technology Trends, Hardware, Software, Artificial Intelligence, Virtual Reality and Augmented Reality, Leo Laporte will update you fast. Let him know your specialized interests, and he’ll customize his fun, interactive presentation to meet your group’s needs.

Leo Laporte is an author, speaker, radio broadcaster, TEDx speaker and internet podcaster with audiences all over the world. Every week he hosts shows on the TWiT (This Week in Tech) podcasting network including the #1 rated “This Week in Tech,” “Windows Weekly,” “This Week in Google,” “MacBreak Weekly,” “The New Screen Savers,” “iOS Today,” “Triangulation,” and “Security Now.” Founded in April 2005, the TWiT Netcast Network produces 19 video and audio shows and over 30 hours of programming each week for more than 6 million listeners and viewers each month.

Leo also hosts “The Tech Guy,” a nationally syndicated radio technology talk show every Saturday and Sunday on over 200 stations on the Premiere Networks.
On television, Leo was well known as the creator and co-host of “The Screen Savers,” and the original version of “Call for Help” on the 24-hour cable and satellite network TechTV (formerly ZDTV) from 1998 to 2004. Before this, he created and was a daily contributor to “The Site,” an hour-long technology news magazine that aired nightly on MSNBC, CNBC International, and NBC Superchannel in Europe and Asia. Leo won an Emmy in 1997 for his work on “The Site.” Laporte has also appeared on such shows as “Showbiz Tonight,” Live with Regis and Kelly,” and “World News Now,” and has written 13 computer books and numerous magazine articles.
For over 25 years Leo Laporte has covered technology and is known internationally as The Tech Guy. TWiT.tv, his podcasting network, began 11 years ago and remains one of the most successful podcasts worldwide. Mr. Laporte has been at the forefront of technology, creating content covering technology news, reviews, help and how-to’s.

In May, 2008, Leo launched a live streaming video version of TWiT called TWiT Live with 50 hours of original programming each week. 2.6 million people watched TWiT Live in its first month and the numbers continue to grow. TWiT broadcasts from a live-streaming video studio in Petaluma, California where he lives with his wife and TWiT CEO, Lisa Laporte. 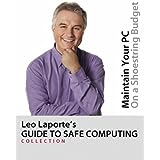 Leo Laporte has authored a number of technology almanacs and gadget guides. Visit his author page on Amazon.