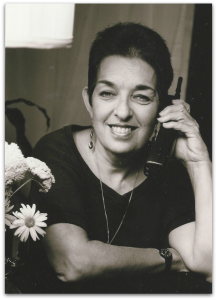 As Susan Levin liked to tell it, one morning she got the idea in the shower (where she got all her good ideas) that she should “do something with speakers.” So, she rushed to Radio Shack, but then had the feeling she was on the wrong track.

Now, as I (Jean-Noel Bassior) recall it, when Susan told me about the “speakers” idea, I said, “I just heard this ad on the radio. It’s for an agency that supplies speakers for free.”

“That’s it!” said Susan, lighting up. “It’s not about speakers… It’s about people who want to be speakers. That’s what I’m supposed to do.”

And so, Speaker Services was born.

We started it together at that moment, but I was a working journalist, and not much good as a business partner. Susan, on the other hand, was looking for a new direction in life.

After a brief stint as a teacher right out of college in New York, where she grew up, she ran a health food store and then came west to California, where the artsy climate of Venice Beach ignited her creativity. I didn’t know her in those days, when she was waitressing at cafes by night and designing baskets and rainbow-colored clothes by day. In fact, I was amazed when Susan (who hated driving in L.A.) showed me photos of a van she’d piloted up and down the West Coast, filled with arts and crafts she sold from town to town. 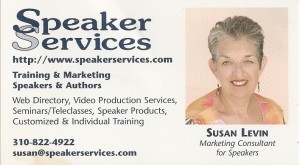 So when the “speaker” idea hit Susan in the mid-90s, the timing was right. She wanted a new career and had the energy and desire to build a thriving business. We pulled that phrase “speakers for free” from the radio ad and created a bi-monthly print directory with the same name, where people willing to speak for free could advertise. Susan ran the business 24/7, and I wrote the listings between assignments. It was an innovative idea – a paid listing service for speakers, not a bureau – and event planners jumped at the chance to get speakers for free.

Heartfelt testimonials poured in from groups and organizations who needed speakers, and from the speakers themselves. Everyone was happy. The people who listed in the Directory were getting calls and gaining experience as they spoke for free – and many were turning free gigs into paid ones. Even the radio station where I’d heard the ad sent a letter thanking us for what we were doing.  It turned out that the spot was for a speakers bureau the station ran as a public service; they were flooded with calls and grateful to have us as a resource. (We didn’t mention that we’d stolen the name from their ad copy.)

Then Susan, who loved to be on the cutting edge, noticed that, as technology exploded, this new thing called the Web was becoming more business-friendly. Some people were even ditching print to go online. Should we jump on the bandwagon, phase out the print version of Speakers for Free, and head for cyberspace?

That was scary, but Susan, as usual, saw the future. And so the online Speakers Directory was born.

It was a good move, and somewhere along the way, Susan changed the name to Speaker Services. She expanded the business to train and nurture new speakers, and she and presentation coach Jack Barnard, with whom she worked closely for many years, developed the Speakers Summit, Speakers Bootcamp, and many other live events where speakers could hone their skills. Susan’s passion was working with those just starting out, and though she could have parlayed these events into pricey workshops in the $5000-10,000 range, she had no interest in doing that. “I want to stay small,” she would say, adding that what she loved most was working with newbies, teaching the basics. And so, if you called Speaker Services, it was Susan herself who answered the phone – no personal assistant, ever. And if you got voice mail, she called you back.

Though I was busy as a journalist, specializing in celebrity interviews, I continued to write the listings for the Directory, and in 2011, Susan and I started doing more coaching together. Though we had worked jointly with clients in the past, this was different. We were combining our energies in a new way. Again, the timing was right. I’d just written my first book and preferred being an author to a journalist, and Susan was more open than ever before to this kind of partnership. 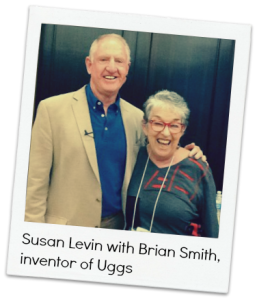 Enter LA Talk Live in the winter of 2013, an Internet radio/TV studio in Los Angeles. Susan had appeared as a guest on longtime friend Suzy Prudden’s talk show, and the next day (in the shower, of course) she got an idea. “Do you want to do a TV show?” she asked. As a longtime talk show junkie, of course I wanted to do it, though I was scared and so was she. But, pushing and pulling each other, we kicked and screamed our way into it and created a show called “Talk Up Your Biz.” Susan produced it, lining up stellar guests week after week, month after month, two or three per show. It was an opportunity to spotlight the speakers in the Directory, but she reached out to publishers, agents, authors and business gurus as well (Her favorite was Brian Smith, inventor of Ugg boots), and I was constantly amazed at who she corralled for the show.

Producing a talk show is a huge job, and I worried that it was too much to add to her workload, but she clearly wanted to do it. And when the viewer stats came in after three months, our jaws dropped: over 287,000 hits. Unbelievable!

Soon we added another show that I hosted and Susan produced called “The Book Beat.” It was an opportunity for me to interview speakers and authors, and once again, Susan brought in the best. The show gave us more air time to feature guests, but it was also Susan’s gift to me. I’d been a print reporter longing to do broadcast journalism, and now I had my own talk show! I couldn’t have done it without Susan as the wind beneath my wings.

Meanwhile, our coaching was thriving. We discovered that we were a great team, combining our expertise to help clients get their message “out there,” through speaking, to the world.

And then, suddenly, Susan got sick, and after a brief illness, passed away on November 1, 2013. She was 68. It felt like this came as we were just taking off; clearly, there was a larger picture that we both couldn’t see.

Susan’s brother, David, offered to give me the business in 2014, and of course I accepted. And so Speaker Services continues, based on the traditions that Susan Levin established. We work with speakers at all stages in their careers, but those starting out are especially welcome here.

Susan used to say that “it’s all about connection,” and that’s what she loved to do most. I used to tell people that Susan “networked the world,” and as Speaker Services continues to bring speakers and audiences together, we’ll do our best to honor her legacy.

Fearless Facebooker, shameless Tweeter, Wise Woman of Speaking (a title she loved), founder (with me) of Speaker Services, lightning quick mind she hid well, sure of  her truth (some said stubborn), her drummer out front, ahead of the rest, doing it her way or the highway on Planet Earth, and now in the Light—my close friend and colleague Susan Levin, who passed away Friday, November 1, 2013. You always were impatient, but I didn’t think you’d leave so soon. Thanks for teaching me this huge lesson: “Don’t wait till it’s perfect… Do it now!”

See my tribute to Susan in the last few minutes (57.30) of The Book Beat show below.