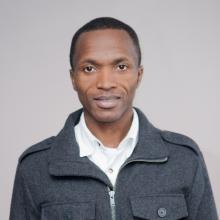 
InfoBest-fit Audiences:PresentationsBioTestimonialsBooks
Civil war survivor and former refugee offers riveting, inside glimpse into the refugee crisis and inspires audience to overcome self-made limitations and live life fully in the land of the free.

When Côme Nzibarega became a translator for the United Nations peacekeeping force in his native Burundi, he also became a target for vicious rebel groups. One night, Côme, then 20, was kidnapped, beaten, tortured and interrogated about UN operations. Finally, after two weeks of brutal captivity, the rebels’ compound was raided and Côme was finally freed—only to face six long years of hardship in refugee camps on his path to freedom.

Today, Côme inspires audiences with his first-hand account of life in the camps, revealing the human—and often heroic—stories behind the nameless faces we see in the news. In his riveting talk, Côme inspires his audience to find their life purpose and express their gifts and talents, as he notes the parallels between being trapped in a refugee camp and trapped by fear that prevents us from living life to the fullest. If your audience is facing challenges such as forgiveness, discouragement, procrastination, disappointment or betrayal, this talk provides help and hope. “Don’t die unfinished, before you’ve expressed your gifts,” says Côme, noting that we in the U.S. are blessed with everyday freedom.

Côme’s presentation will bring your group up to speed on the hotly-debated “refugee problem” that’s constantly in the news, while motivating the audience to fulfill and maximize their potential. It’s also an amazing testament to the power of forgiveness that will appeal to religious and spiritual groups. “Forgiving the people who kidnapped and tortured me helped me to heal and move on with my purpose in life,” says Côme. “Holding grudges against people who did bad things to us drains energy that we could be using to pursue our true life purpose.”

You’ll get an inside glimpse of the day-to-day life in the refugee camps, and gain an appreciation of the indomitable spirit of these displaced people seeking freedom. “The richest places in the world are refugee camps because they’re full of people with potential they cannot express,” says Côme. “Many problems the world faces today could be solved by people stuck in those camps.”

Your audience will leave Côme Nzibarega’s life-changing presentation with a renewed passion for living, determined to maximize their true potential instead of procrastinating or being distracted by things that don’t support their  life purpose. ”My goal is to motivate you to step beyond your limitations and soar into greatness,” says Côme. Everyone leaves Côme’s passionate talk with a deep appreciation for the courage of the refugees behind the headlines, inspired to break free of self-made limitations and express their unique gifts in the land of the free.

Offered as keynotes, breakouts, seminars or workshops, retreats, trainings and Webinars, and customized for your group. Côme Nzibarega is also available as a panel guest or moderator.

Express Your Unique Gifts and Live a Fulfilling Life!

Côme Nzibarega uses his incredible life story to help people discover their unique life purpose and empower them with the inspiration and motivation they need to overcome life’s obstacles and reach their destiny. Drawing on his first-hand experience as a refugee, he inspires his audience to express their unique gifts so they can live a fulfilling life and “die empty.” You’ll be profoundly touched by Côme’s story and gain a deep understanding of the challenges refugees face. Côme “found hope in the middle of nothing,” and his story will inspire anyone who wants to connect with their true purpose and live life to the max.

Become the Leader You Were Created to Be

Do you think of yourself as a leader? “Every human has the instinct and capacity for leadership, but most do not have the courage or will to cultivate it,” says Côme Nzibarega. “Leadership is not an exclusive club for the elite, but rather a quality you develop when you connect with your life purpose and sense of self-worth.”

In this interactive presentation, you’ll learn how to lead by inspiring people, not manipulating them, and you’ll develop the unique mental attitude that marks you as a born leader. “It’s how you think that distinguishes you as a leader,” says Côme, “not manipulating others or playing upon their fears and needs.” In this talk he shows you how to master the mindset of leadership by creating a strong and confident connection to your own sense of purpose and self-worth.

You’ll identify and unlock the leadership qualities you already have, as Côme guides you step by step to your personal revelation of leadership. You’ll explore the qualities of effective leaders and how to eliminate the blocks that prevent you from tapping your innate leadership power. You’ll understand the principles that enable you to lead wisely and develop the tact that generates both response and respect from your teams and colleagues. With wisdom and power, Côme reveals a wealth of practical insights that move you from being a follower to becoming the powerful leader you were meant to be.

Live Life to the Max!

With his motivational message based on his story of surviving six years in refugee camps, Côme will enable you to:

No one who listens to Côme speak with an open heart and mind will ever again prefer the common, settle for less than the best, or stop short of fulfilling his or her true potential. “You’re either a creator of fact or a creature of circumstance,” says Côme. “You either put color into the environment or, like a chameleon, take color from it. Stop being a thermostat, allowing your environment to control you; instead, control your environment.”

You’ll leave this life-changing presentation feeling like Shakespeare’s Othello, of which Iago said: “She counts it a vice in her virtue not to do more than she is asked to do.” If you’re an underachiever or bored with success, Côme will rekindle your passion for living and inspire you to “Go for the max!”

Côme’s story, in his own words…

“I have a gift for languages, and I speak five—French, Swahili, Kirundi, Amharic and English. In 2005, languages helped me land a job as a translator for a United Nations peacekeeping force sent to my country of Burundi, which for decades has been plagued by conflicts between the nation’s two largest ethnic groups. But by assisting the peacekeeping force, I became a target for a rebel group.

“One dark night, as I returned from a run, a group of rebels kidnapped me and took me into the jungle to their compound, where they beat me, tortured, and interrogated me about the UN’s operations. Finally, after two weeks, UN peacekeepers raided the compound: I was free, but not safe—and I feared that if I returned to my home, I would put my family at risk as well. Leaving behind my parents and siblings, I set out for my uncle’s house and, after I heard that the rebels had tracked me there, I had to flee the country.

“At 20 years of age, I ended up in a refugee camp in Ethiopia with a few other Burundians and many more refugees from Somalia, Sudan, and the Democratic Republic of Congo. Life in the camp was very difficult. I missed my family desperately, and the living conditions were deplorable, with a roof that could not keep water out when it rained. I felt hopeless. It was really painful, because I could not see a future in front of me.

“I was also frustrated because I was not allowed to work in the camp. I saw stifled potential in myself and in others all around me. I observed that the richest places in the world are refugee camps because everyone is created with a purpose, with gifts, and with talents. Refugee camps are full of people who are full of potential but cannot use it. Maybe solutions to some of the problems the world is facing right now are in those people who are stuck in refugee camps.

“I spent my time in the camp running, which I found therapeutic, and also found community in a church within the camp, where my faith was deepened in the midst of my pain. The church helped me a lot and gave me hope that God would one day open the door for me to get out of the camp. The only thing that gave me hope and joy was knowing that God is in control of everything. And that made me strong.

“Finally, after six years and as many interviews with both the UNHCR and the U.S. government, I was told by a friend one day that my name was on a list of refugees selected for resettlement, which was posted outside of the UNHCR office. At first, I did not believe it—it was too good to be true.  But when I checked, my name was there. I was very excited because at last I was going to be able to fulfill my vision and my dream.

“I was resettled in Spokane, Washington, on August 29, 2012. I was paired with a roommate—another refugee from Eritrea—and with a volunteer, Jason, who became a good friend and running buddy. I found work at a Wal-Mart, working the night shift, and  I found Genesis Church, a local church that provided me with a sense of community. I admit, though, that I still struggle with cultural differences: In Burundi, you can stop by a friend’s house at any time without scheduling something in advance, which is different than in the United States.

“I also joined the staff of World Relief Spokane, the agency that helped resettle me, where I now serve as a job developer, helping other refugees find their first jobs. I enjoy interacting with refugees from around the world and seeing them find the dignity of working and providing for themselves, which most are denied in the camps.

“I speak publicly at every opportunity, telling my story—my testimony of how God has sustained me through incredibly difficult times—and urging anyone who will listen not to forget about those still in refugee camps. I dream of someday hosting a television program where I can provide a platform for others to tell their stories.

“I want to be a voice for those who are suffering in refugee camps around the world, and to use my story to inspire people who are going through tough times. Stories are really powerful—even Jesus preached using stories. I truly believe that stories can change the world.”